There’s an unusual nut from Queensland, Australia, that will never find its way into a candy bar or portable protein pack. That’s because the Yowah nut is actually a naturally forming concretion — an inedible ironstone nodule that looks very much like a nut. What’s even more fascinating about Yowah nuts is that when they’re cracked open, a select few have gem-quality opal hidden inside. 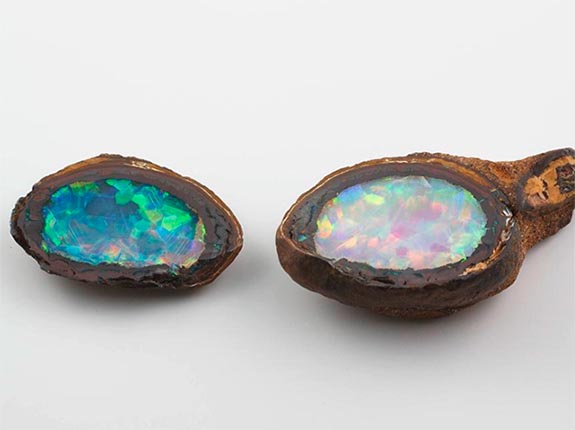 Opal is one of two official gemstones for the month of October. The other is tourmaline.

In January of 2011, the extraordinary “Yowah Nut Opal” became a permanent resident of the National Museum of Natural History in Washington, DC. A gift of the Richard Ashley Foundation, the specimen was given the nickname the “OMG Opal,” because people who saw it for the first time would say, “Oh, my gosh.” 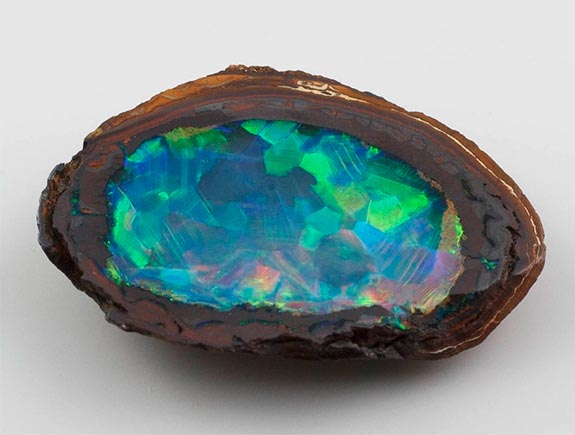 “It reminds you that the Earth is a pretty amazing place and we haven’t seen everything yet,” stated Jeffrey E. Post, Ph.D., curator of the National Gem and Mineral Collection, in a video posted to the Official GIA Channel on YouTube. “There’s always a surprise waiting for us in the Earth somewhere and this is just a great example of that kind of a surprise.”

The Yowah Nut Opal officially weighs 29.83 carats, but other “nuts” pulled from Australia’s Southern Cross Mine have been as large as 20 centimeters (7.87 inches) wide. 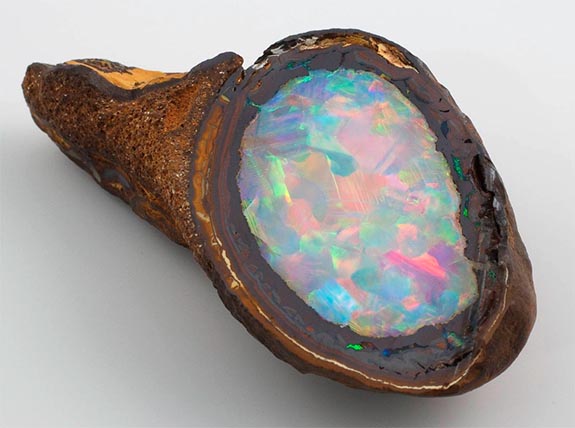 The Yowah Nut Opal displays flashes of red, orange, yellow, green, blue and purple. One side of the Yowah Nut has a bluish body color while the other side is more milky in tone. Post explained that the difference in color is attributed to the thickness of each slice.

Rod Griffin, the miner who discovered this opal nut, told the Smithsonian it is the finest he had unearthed to date.

Since opal was first discovered in Australia circa 1850, the country has produced 95% of the world’s supply. Scientists believe that the abundance of opal can be traced to a vast inland sea that once covered a large portion of Australia.

As the sea regressed, a rare episode of acidic weather was taking place, exposing pyrite minerals and releasing sulphuric acid. As the surface of the basin dried further and cracked, silica-rich gel became trapped in the veins of the rock. Over time, the silica solidified to form opals.

An opal’s silica structure contains 3% to 20% water, according to the American Gem Society. The value of a fine opal is based on a number of factors, including brightness, color, pattern, body tone and consistency (how it looks from multiple angles).

While Australia remains the world leader in opal production, the October birthstone is also mined in Mexico, Brazil, Honduras, Ethiopia, the Czech Republic and parts of the U.S., including Nevada and Idaho.